Who haven't heard of Basaksehir Medical city! One of the biggest medical cities in the country, 53 per cent of which has been completed and is projected to be operational by the middle of 2020.

Turkey is always striving to improve infrastructure and construct urban projects. And this strategy would contribute to the growth of the Turkish economy by attracting investors, who wish to settle or even those looking for the best destinations for treatment and medication.

Based on this premise, Turkey launched towards its glory in the field of medicine, with professional training for doctors and surgeons, or through modern equipment and equipment, leading to the construction of major medical cities in Europe and the world.

Among the most critical medical cities that Turkey has worked to achieve is Basaksehir Medical City.

It is an exemplary city where Turkey relies much on increasing local and foreign residents' demand for treatment using the latest methods and the latest scientific techniques available in the medical arena.

The following article will introduce you to Basaksehir, the medical city, and the investment ground.

What is the medical city of Basaksehir? 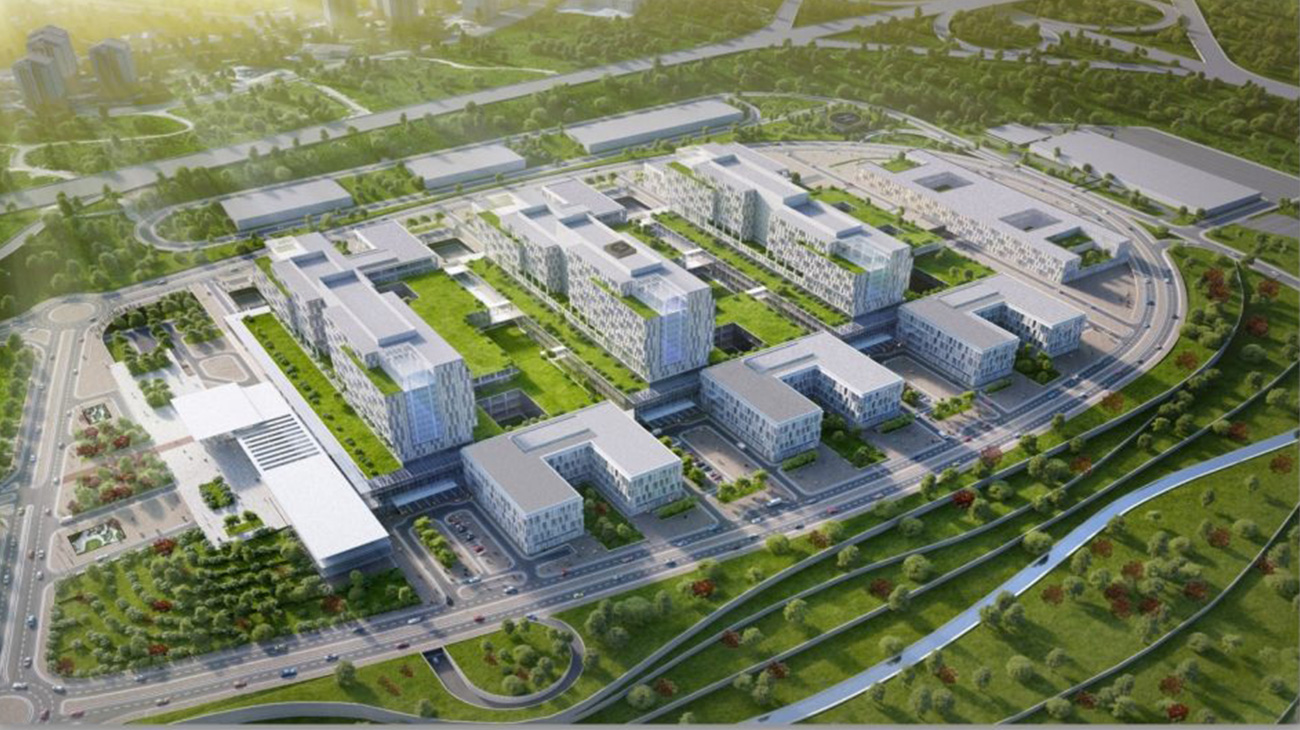 The already founded medical cities set up by the Turkish government with the highest levels of modernity and technology are one of the most prominent features of the renaissance in the health sector.

Basaksehir Medical City has a gross land area of 1 million square metres. The medical city has 8 buildings, each with a full specialist facility, as follows: Children's Hospital, Obstetrics and Gynecology Hospital, Oncology Hospital, Neurosurgery Psychiatric Hospital, Physical Therapy, and Rehabilitation Center. They will support a total of 2,682 seats.

The city's main structure will be one of the world's biggest earthquake-resistant structures, with 2068 seismic insulators shielding the foundations of all the buildings in the city.

Thanks to these new seismic isolators, surgical procedures will be possible without any shame, even during the earthquake, and the volume of iron required to build the facility will exceed 95,000 tons of iron, 10 times the weight of the iconic Eiffel Tower.

The ceramic area of 400,000 square meters used to coat the hospital's exterior facade is enough to cover an area equivalent to 50 football fields.

This year the project received the PPP, a prestigious prize from the Thomson Reuters'ın Prestigious Project Finance Awards.

How did the Basaksehir Medical City project start? 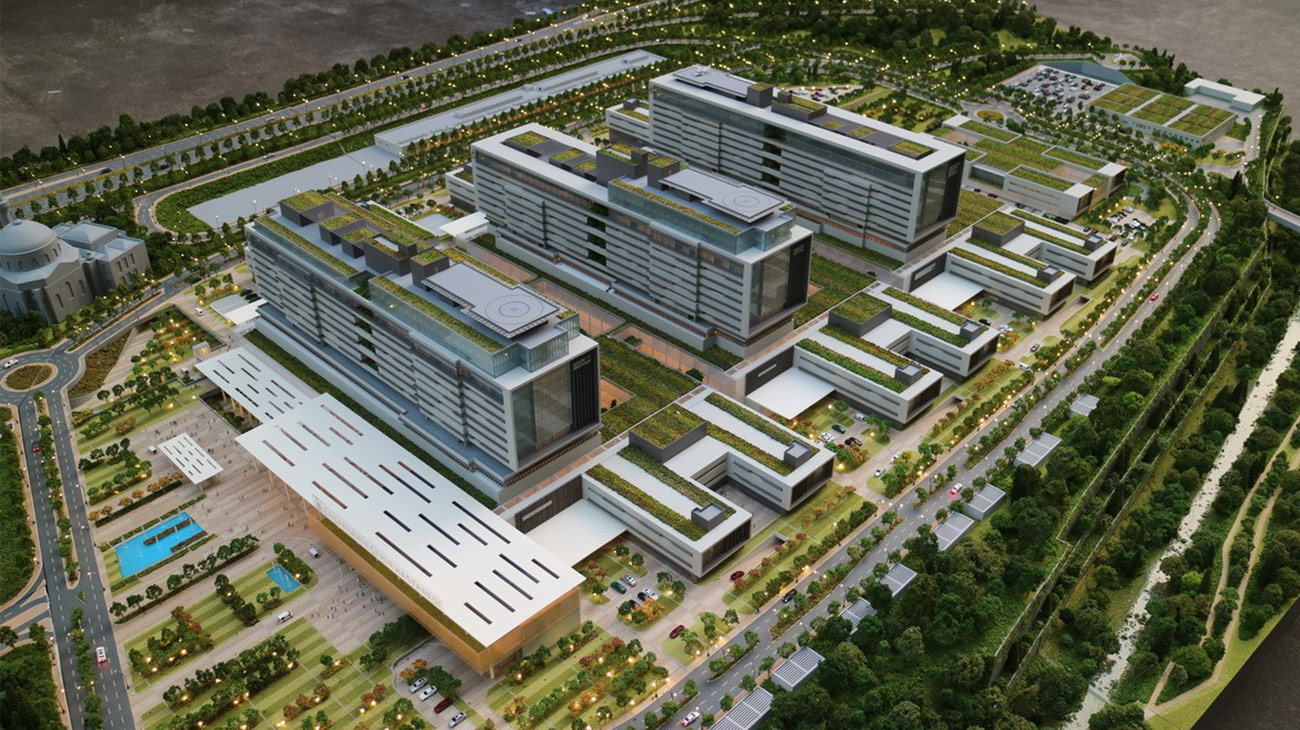 The Basaksehir Medical City project was launched according to a government plan, the foundation stone of which was laid in 2016, based on an integrated project to be the best medical city in the world.

After four years of achievement, the main part of the city, the central part, was opened in April 2020, coinciding with the rise of the Corona epidemic.

It is the challenge that Turkey raised in the face of the epidemic by providing the hospital with the largest number of resuscitation beds when there was an urgent need for more intensive care units.

Precisely, in mid-May 2020, the total and final opening took place in the presence of the country's President Recep Tayyip Erdogan and a large number of ministers, ambassadors, and representatives of the partners in building the project, "a Japanese company that contributed to the completion of the medical city."

What is the capacity of the medical city of Basaksehir?

Basaksehir is considered one of the largest medical cities in Istanbul. It sits on one million and 21 thousand square meters with a capacity of 2,682 beds.

As we mentioned in the above paragraph, Basaksehir Medical City contains the largest number of resuscitation beds. The intensive care departments have more than 456 beds, which is a significant number, compared to the rest of the hospitals that do not exceed 20 or 30 resuscitation beds.

The number of operating rooms in Basaksehir Medical City is 90 rooms. In comparison, the examination rooms reach 725 rooms, 28 rooms have been allocated for the delivery of pregnant women, and 16 units with beds for the injured and damaged by fires.

Basaksehir Medical City has more than 5 thousand laboratories to carry out analyzes and examinations of incoming patients.

Doctors, workers, patients and their families in the Basaksehir Medical City can also park their cars in a hangar that can accommodate more than 8,134 vehicles.

Concerning the number of patients that the Medical City in Basaksehir can receive daily according to the equipment available. Hence, it exceeds 35 thousand patients, including 7 thousand urgent emergency cases, equivalent to 35 hospitals' capacity.

Basaksehir's patients serve nearly 600 doctors, more than 2,000 nurses, and 1,275 auxiliary health personnel, while the rest of the other affairs staff in the Medical City are 2,230 employees.

What distinguishes the Basaksehir Medical City, which is equipped with an environmentally friendly system, contains three helicopters to facilitate the arrival of emergency cases and avoid traffic jams in Istanbul.

The medical city of Basaksehir .. The interface of medical tourism in Turkey

The Basaksehir Medical City project was not arbitrary, as it was based on an urgent need for a medical city in Turkey with the size of these capabilities capable of accommodating more than 35 thousand patients, especially since Turkey opened the new Istanbul airport, which would receive a considerable number of travelers daily.

And as we mentioned above, the importance of the medical city in Basaksehir has increased due to the great desire to Turkey's direction to expand the horizon of medical tourism. It already attracts a fair number of those wishing to receive treatment in Turkey, achieving revenues that exceeded 3.5 billion US dollars in 2019 and expectations of revenues of up to 5 billion dollars by the end of 2021.

On the other hand, the vast area of Basaksehir helped build the medical city, which is an essential infrastructure for itself and the residents and for the future of the region in which housing projects are remarkably abundant in recent years and plans to develop transportation within the Istanbul highway network are increasing.

In general, the medical city of Basaksehir is nothing more than a continuation of Turkey in its urban renaissance by constructing massive projects such as the Valley of Life, the Istanbul Water Canal, and Istanbul's new airport, for example.

Apartments for sale in Basaksehir

Like the infrastructure projects, the medical city in Basaksehir has contributed to the mega project in increasing the completion of residential and tourism projects such as hotels and urban commercial projects such as offices and shops, in addition to a remarkable rise in real estate prices in Istanbul in the area of ​​Basaksehir, due to the double increase in demand for Basaksehir. Whether through the volume of construction projects by contractors and construction companies or through the volume of purchase and the desire to own real estate by Turkish and foreign investors.

The rental of houses and apartments within the residential complexes of Basaksehir has increased dramatically in the last five years, mostly by Arab residents due to the availability of the area on suitable living conditions, "international schools, a variety of transportation, etc."