Real estate for sale in Sultanahmet: To own a property in ancient Istanbul has deep secrets

Can you visit Turkey without a tour of Sultanahmet? of course not!

What is the importance of buying an apartment in the Sultanahmet area?

To answer the second question, we present the following article to find more information about the Sultanahmet area and the most important advantages of buying an apartment for sale in Turkey especially in Sultanahmet and other secrets related to the region’s heritage and its roots in the depth of Ottoman history.

Where is Sultanahmet located?

Sultanahmet is located in the heart of old Istanbul,  in the European part of the city. It is the beating heart of tourism in the region, as it is a complex of many archaeological monuments and historical evidence that narrates many successive civilizations. It is one of the best tourist destinations in Istanbul.

What makes the Sultanahmet area more attractive to tourists are the parks, green spaces, and recreational spaces surrounding its silos and historical monuments and the beautiful coast of the Marmara Sea.

How to get to Sultanahmet?

There is no easier way than getting to Sultanahmet. It contains a considerable number of transportation types, which allow the tourist or resident to reach it in the shortest possible time.

The transportation in Sultanahmet is divided into:

The tramway is among the most important and most active means of transportation in Istanbul, and access to Sultanahmet is linked to the tram's use, as there is a station bearing the same name, where the visitor to Sultan Ahmed can stop directly in front of the Blue Mosque.

One of the advantages of the Sultanahmet tramway is that it connects with several other transportations, such as the metro and various buses, making Sultanahmet close to various vital areas of Istanbul.

Many people are unaware that there is a metro station in the Sultanahmet area at the end of the Grand Bazaar, located at the Taksim Line level. It is called "Vizcilar", and it is close to many other tourist areas such as Taksim Square, Istiklal Street, Eminonu and the rest of the major commercial areas in addition to the Cevahir Mall And Levent district.

One of the advantages of Sultanahmet is the availability of a special type of bus that leads directly to the new Istanbul airport at the cost of fewer than 3 dollars, as the buses leading to the airport depart at the head of every hour.

It is also possible to reach the second airport on the Asian side, Sabiha Airport, using the metro line Marmaray.

What are the most important tourist attractions in the Sultanahmet area?

Sultanahmet attracts millions of tourists from all over the world annually. Tourists come specially to tour one of its historical landmarks and take pictures inside Sultan Ahmed Mosque or Hagia Sophia Mosque, which became a mosque after it was a museum.

Among the most beautiful tourist places that can be visited in the Sultanahmet region: 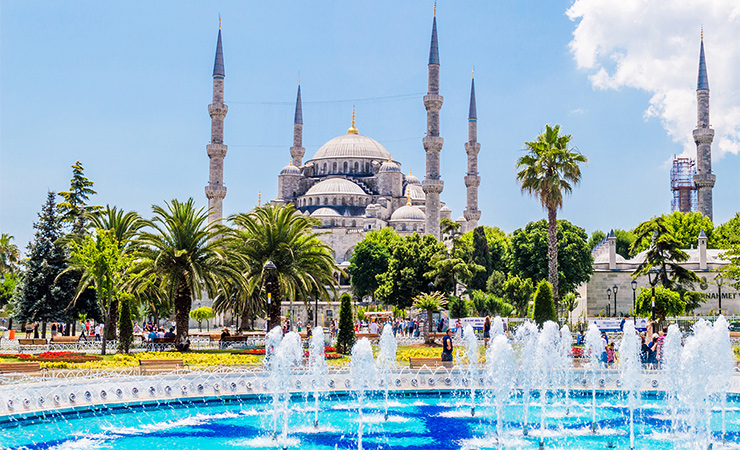 The name of Istanbul was associated with the Sultan Mosque, which is considered a masterpiece of Islamic Ottoman architecture with a capacity of 10 thousand worshipers. It is located directly next to the tram station, which made it easy to reach.

It isn't easy to build a mosque like the Sultan Ahmed Mosque despite the many copies inspired by its architecture in various Islamic countries. The blue color is remarkably prominent in the mosque, so the Blue Mosque was launched on it. 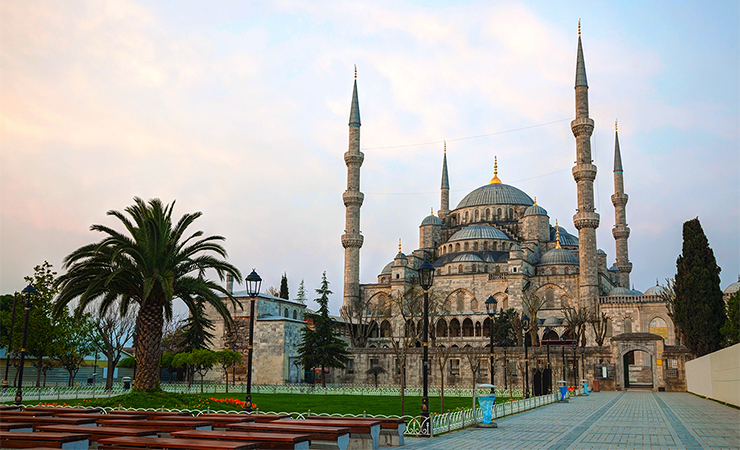 Tourists do not stop at the Sultan Ahmed Mosque only. Still, the Mosque Square takes a large part of the trip, especially because it contains gardens, churches, museums and popular bazaars ideal for tourism and shopping. 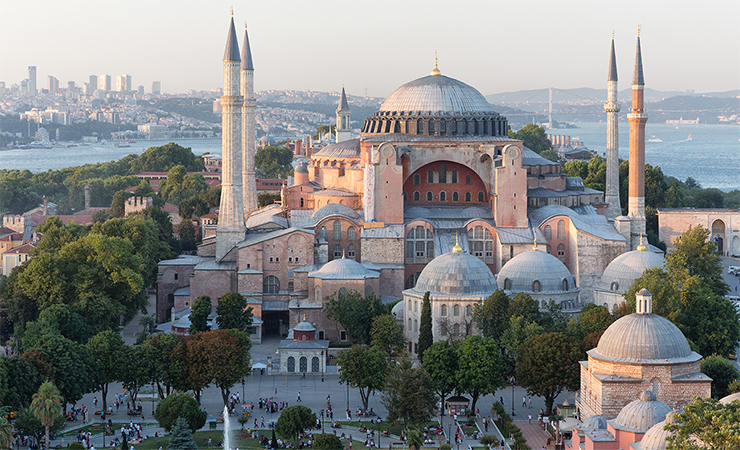 One of the most famous landmarks in the Sultanahmet area is the Hagia Sophia Mosque. It was a museum on the founder of the Turkish Republic's orders, Mustafa Kemaluddin Ataturk. Still, it returned to normal with a ruling issued by the Supreme Court in 2020, which ruled that Mehmed the Conqueror's endowment and his will must be restored at the same time. 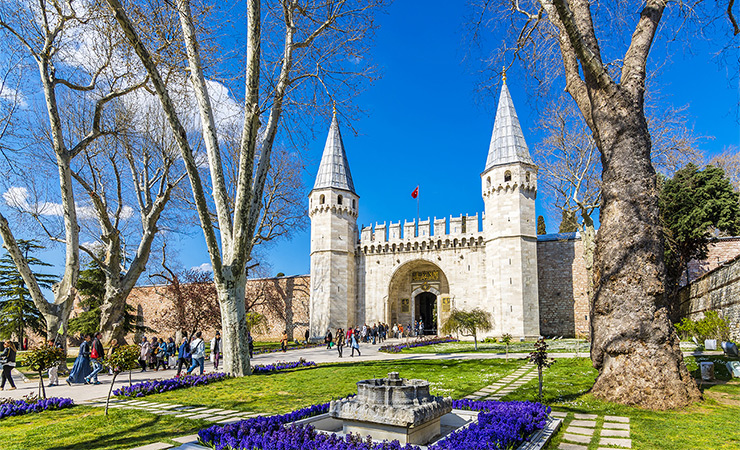 It is impossible to visit the Sultanahmet area without spending a tour of the Topkapi Palace, which overlooks the Bosphorus, which is distinguished by its wonderful decoration and white marble, especially in the halls where the meetings of the Ottoman sultans were held. 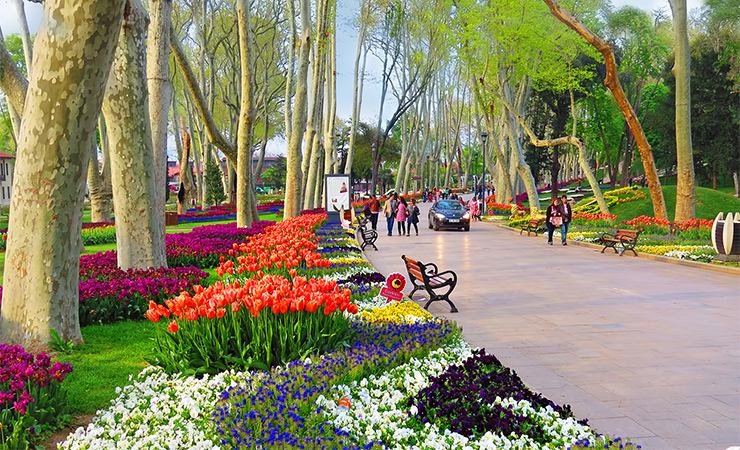 Gulhane park or the Royal Garden was called in the Ottoman era, as only one wall separates it from the palace. And today it is considered one of the best tourist attractions for those wishing to rest, hike or entertain and enjoy the greenery of trees and various types of flowers. 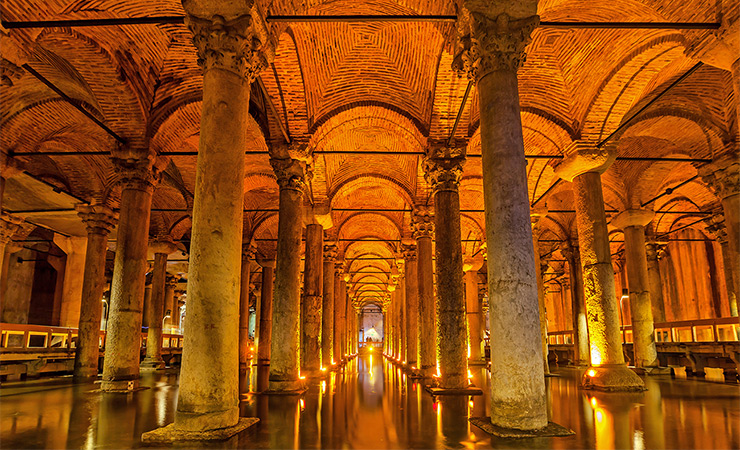 It is known as the cathedral basin, it is a distinctive tourist attraction and is considered the largest cistern in Istanbul, Europe, with an area of 9800 square meters. 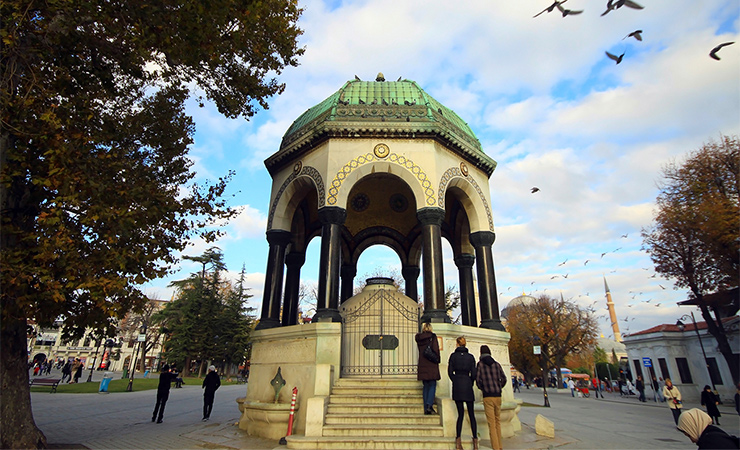 The fountain is a gift that one of the German emperors gave to the Ottoman Sultan Abdul Hamid II, and it is one of the most important tourist attractions in Sultanahmet Square. 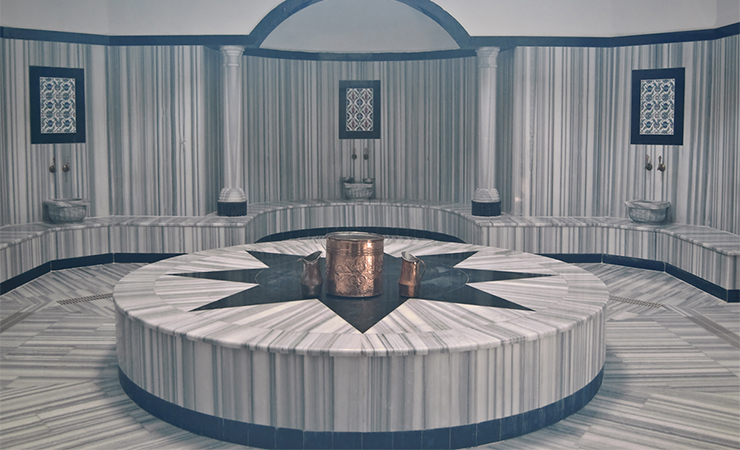 Visiting Turkey, without taking a Turkish bath, means missing a lot, as the Hammam is one of the well-established Ottoman customs, where men and women can take a dip in their suite. And taking a Turkish bath according to the Ottoman rituals provides tourists with unparalleled peace and comfort.

Among the most famous baths are located in the Sultanahmet area; Hagia Sophia Bath, Cemberlitas Bath, and Iloilo Bath.

Most of the hotels that foreign tourists are interested in are located in the Sultanahmet area, and they range from 3-star hotels to upscale 5-star hotels.

Sultanahmet hotels are distinguished by being close to all tourist areas and containing various entertainment services to suit all types of customers from business tourists, among the most important of which are Sultanahmet Hotel, Sorriso Hotel, and Season Hotel.

They are popular markets or tourist markets. They are available on various products, from food and spices to clothes, accessories, exchange shops and others, the most famous are the Egyptian market and the roofed market.

Buying apartments for sale in Istanbul, especially in Sultanahmet

Among the most significant areas favored by Arabs for real estate investment in Turkey is Sultanahmet. It includes several factors, such as tourist attractions, commercial centers, transportation, beautiful weather, green spaces, tranquility, and security.

Among the real estate options available to foreigners and Arabs, in particular, to invest in the Sultanahmet area, we suggest as follow:

For those looking to invest in the Sultanahmet area, Al Huda Real Estate Investment offers many suitable offers and exceptional discounts.