In the journey of finding the best real estate deal in Istanbul, Turkey, and while you were looking for the best area in it to own a property, you must have encountered with the region of Sariyer", one of the most beautiful places to live and invest in Turkey, so where is Sariyer located? And what are the advantages of buying a property in Istanbul - Sariyer? And does Sariyer have a strong infrastructure that qualifies it to be the best area for real estate investment in Turkey, and what features that makes the demand for Sariyer is more compared to the rest of Istanbul’s districts?

Alhuda for Real Estate Investment in Turkey invites you to read the following article to find out the answers to all the above questions.

Where is Sariyer located?

Sarıyer has an impressive architecture, which has made it one of the largest and most important tourists and economic destinations in Istanbul.

It is located in the far north of the European part of Istanbul in an area of ​​161 km2 and has a population of approximately 289 thousand people.

And Sariyer has an exceptional and strategic location, being a large area consisting of villages in the western section of the Bosphorus at the historical lighthouse Rumeli, up to the Tarabya, Yenikoy, and Istinye regions.

Sariyer also manages the Black Sea region on the western side of the Bosphorus region and contains the village of Kilyos. Sariyer borders to the north of the Eyup region and the south the Besiktas region and the west the Sisli region.

The seven facts about real estate investing in Sariyer, Istanbul

The most beautiful tourist places in Sariyer

The luxurious Sariyer area contains many historical and tourist attractions that have turned it into a favorite destination for tourists who come from all around the world to explore and enjoy the best times in it.

Below you can get to know the best tourist areas in Sariyer:

It is considered one of the best and most beautiful areas of Sariyer, where it has historically been a destination for the princes and sultans of the Ottoman Empire to stroll in the middle of green lawns and enjoy the beauty of the flowers of the Emirgan Park, which extends over an area of ​​117 acres, which contains in the middle shaded by trees.

The park, which includes many gardens, contains more than 120 types of roses, the most prominent of which is the tulip flower that dazzled the Europeans and symbolizes the victories of the Ottoman Empire and its golden periods.

It should also be noted that the name "Emirgan Park" came after the name of the Ottoman commander Amyris.

The park also includes many rare trees, cedar trees, pine trees, camphor, vast spaces for jogging, playgrounds for children, in addition to the Sakip Sabanci Museum, which is visited by fans of artistic heritage and paintings.

It is considered one of the most crowded areas in Sariyer, where tourists can rent luxurious villas with capturing views, in addition to the most famous university in Istanbul and the luxurious Istinye Park Mall which is visited by thousands annually. 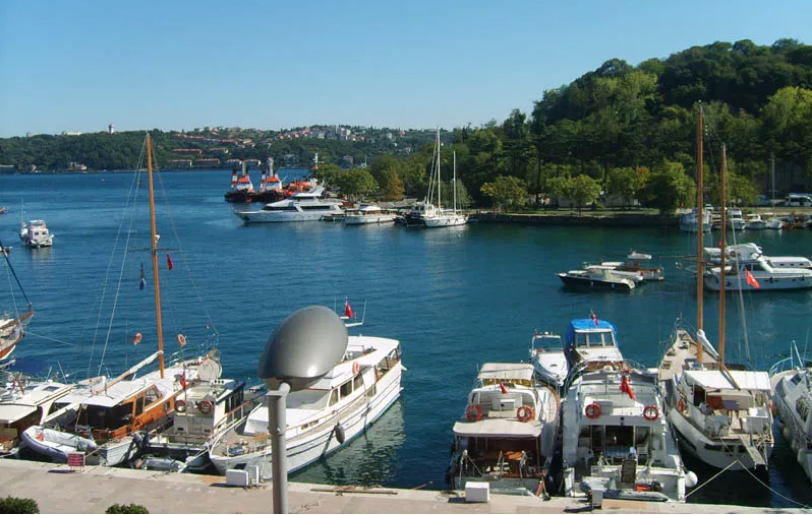 The port of Istinyia is dedicated to Sarıyer, which contains huge docks for shipbuilding for fishing, and there are also tea gardens with direct views of the sea, with charming sunrise and sunset views.

The United States of America chose the port area to build its consulate due to its distinction from other areas of Istanbul with a special kind of attraction. 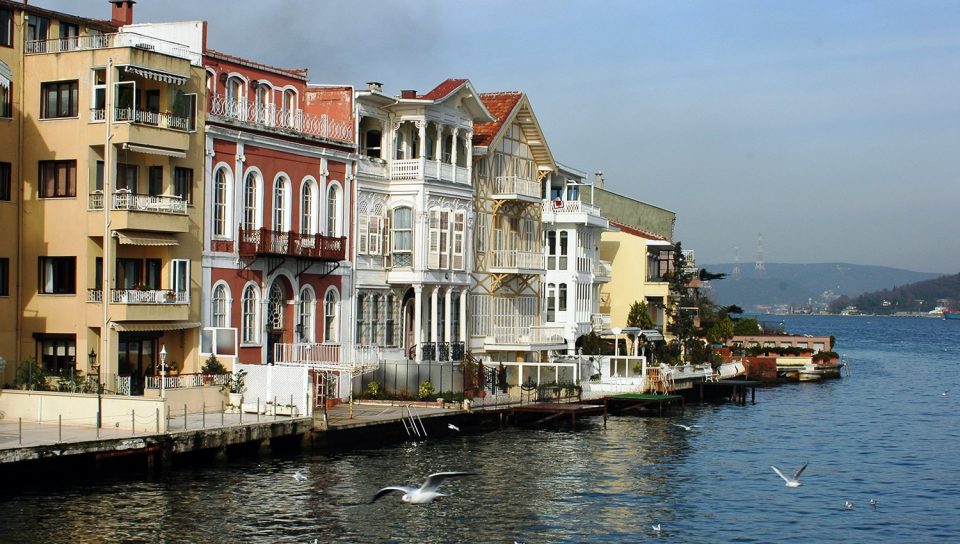 Yenikoy or the historic old houses and villas neighborhood, where it was built on a hill overlooking the sea and contains many Orthodox churches in addition to many cafes and bakeries of an original architectural nature. 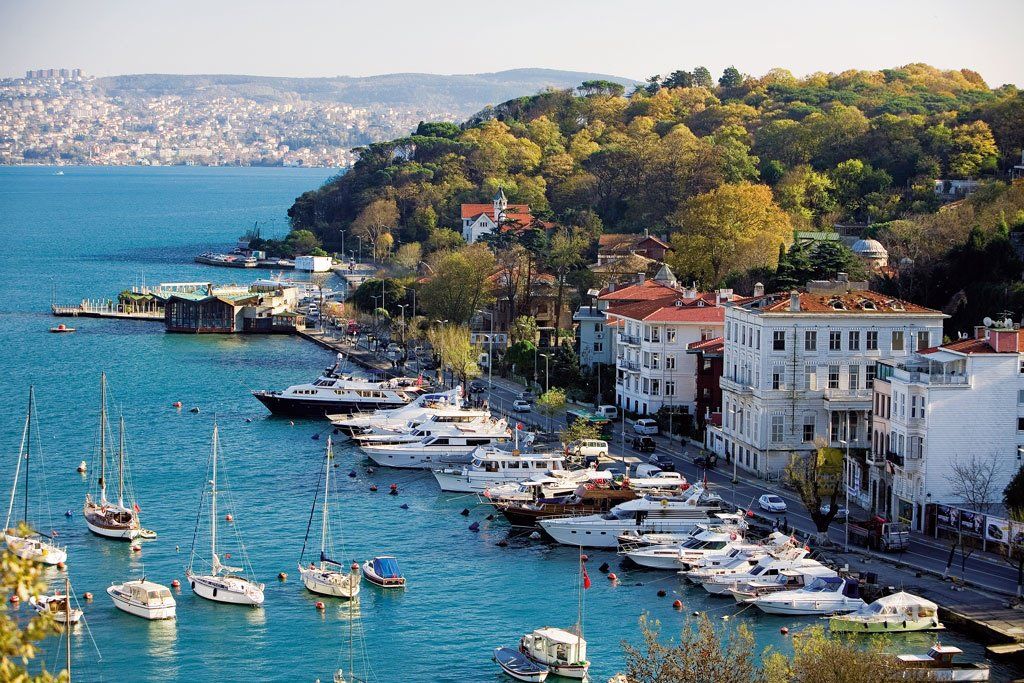 Tarabya or the tranquility and treatment neighborhood, where the tourist can be away from the hustle and bustle of Istanbul in any of its luxury hotels and enjoy seafood in one of its luxury fish restaurants.

It is the deepest neighborhood of the Gulf, full of places and restaurants overlooking the Bosphorus, where many tourists go to drink tea in the most beautiful sight of its kind in Istanbul.

Bahcesekoy, which includes the Belgrade forest and is one of the northern villages of the Sariyer region, is a very popular picnic and camping destination for Turks and foreigners, especially for the weekend.

There is also a nursery of the founder of the Republic of Turkey, Mustafa Kemal Ataturk, which is devoted to selling the most beautiful flowers, trees, and agricultural seeds.

The city of clubs, which in turn includes small areas overlooking the Black Sea and contains many long coats with rocky coasts overlooking the Bosphorus Strait, but since the nineteenth century the neighborhood became full of cafes, bars and clubs, so it became called the clubs’ neighborhood.

In recent years, the process of buying a property in Istanbul, Sariyer region, has flourished given being the best area for quiet living and successful investment, as demonstrated by the experiences of Turkish, foreign and Arab businessmen who bought properties in Istanbul - Sariyer.

Historic and tourist attractions in Sariyer

Sariyer includes many monuments, historical monuments, and museums among them:

Alhuda Real Estate Company in Turkey presents the ALH-1702 project for you which is located in Ayazağa / Sarıyer one of the most popular and greenest areas of the city.

And offers you all your needs thanks to the mall, cafés, and restaurants around, a school, mall, and hotel inside.

The project is only 10 minutes away from Bilgi University and has a great forest view.

It is close to the business centers of the city like Levent, Şişli, and Maslak, and is near the metro station which connects to the Mecidiyeköy metro line.

The project is surrounded by hospitals like Ethica Levent Hospital and is only 7 minutes away from TEM Highway.

If you are looking for the luxury of living and investment, take a step immediately and adjacent to wealthy Turkey in the Sariyer region or contact directly with the staff of Alhuda Real Estate Company who will inform you in detail about all real estate projects in Sariyer area in addition to that, they will accompany you on a real estate tour to the project so that you can choose the best for you.